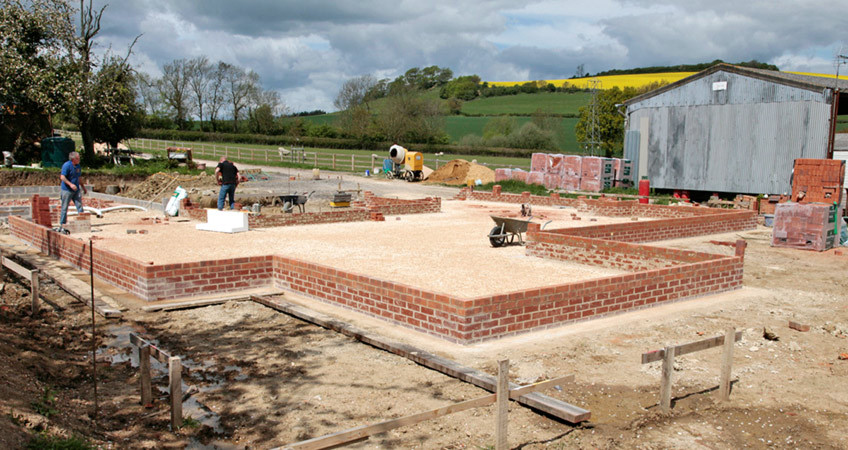 Posted by admin In Blog

Tips on laying the foundations of your new Sussex home

A foundation for a building, unless it’s a skyscraper, is usually known as a ‘shallow’ foundation and is made up of strips or slabs of concrete that are lowered roughly one metre into the earth. They help to support the structure and preserve structural integrity. It’s the same for Sussex Homes as it is for any other.

How Do Foundations Work?

The house rests on the concrete inserted into the earth and the weight of the walls and columns is transferred to the soil or bedrock.

Another type of foundation is known as slab on grade and involves a huge slab of concrete placed on the surface. The weight of the building is transferred through this slab of concrete and into the ground.

What Can Go Wrong With Foundations?

It is important that foundations are made to a high quality, as well as laid correctly. If one part of the foundation “settles” with more weight on it, it could be damaged or cause the building to slip to one side. If the foundation is not strong enough to support the building, structural integrity will be compromised.

Another problem that can beset foundations is known as ‘scour’. This is when water that is flowing under the ground causes the soil around the foundations to be displaced, leaving less support for the foundations.

Rubble trench foundation is a type of foundation that uses loose stone or rubble to create support for the structure. It minimises the use of concrete, making it more environmentally friendly than conventional foundations because of the huge amounts of energy required for making concrete.

It also allows water to drain through in a more efficient manner, preventing expansion or weakening of soils.

The rubble trench foundation is less expensive than other foundation options but because it is not particularly common, it may require the approval of a building engineer if building officials are not aware of this style of foundation.

Laying Foundations For a New House

No matter how keen you are on a bit of DIY action, it is strongly recommended you do not attempt to install foundations yourself. There’s simply so much that can go wrong, from not having the necessary drainage, not being dug deep enough, the use of inferior materials or even the wrong materials for the type of soil you have in your area.

Even something seemingly simple like installing a copper pipe to deliver water or gas to your home through a slab on grade foundation can cause huge problems because of the copper not being lagged and therefore reacting with the concrete over time and eventually failing. It’s simply not worth the hassle or the risk of building an expensive house on foundations that might not hold it securely for its lifetime.

The cost of laying Sussex home foundations will depend on who you hire, and how big the foundations need to be. Compare quotes from professional contractors so as to make sure the work done is of a high quality and won’t leave you high and dry.

Website By MediaGaff.com. All rights reserved.
Go to top